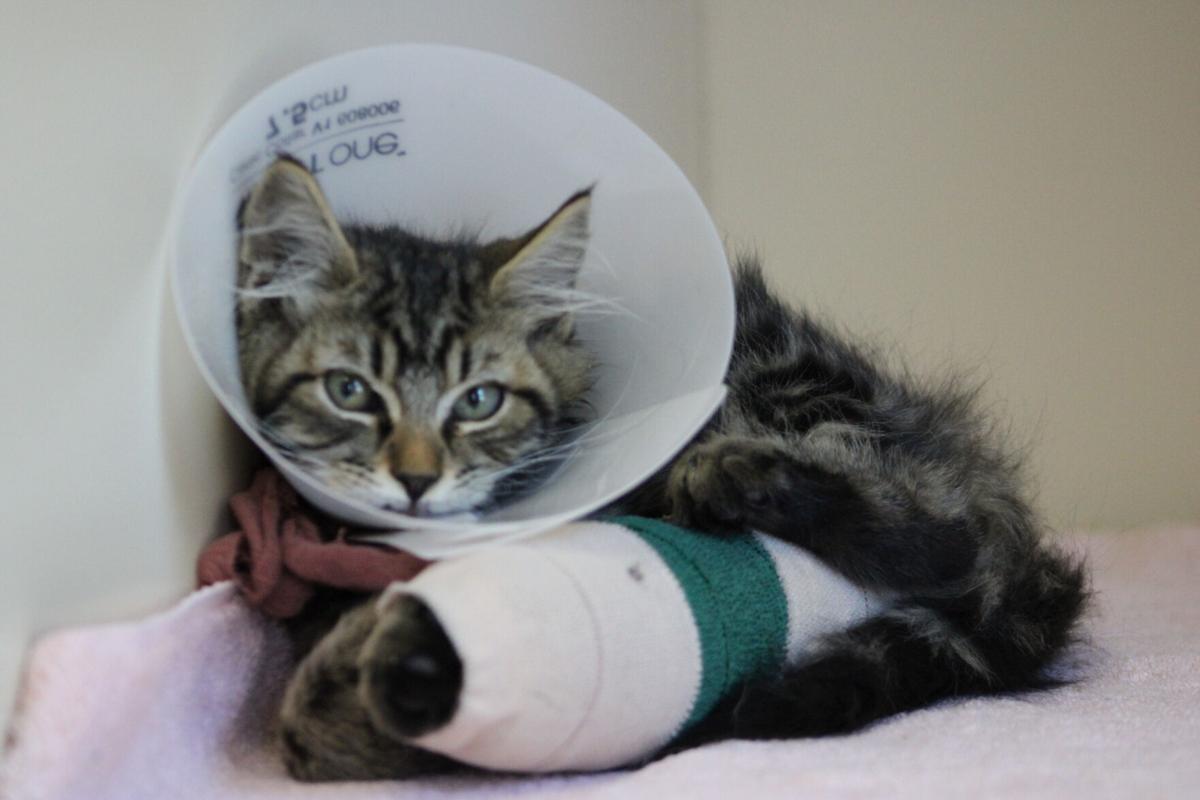 Crash sits with his leg in a splint and a cone around his head so he can heal from his injuries at the shelter. 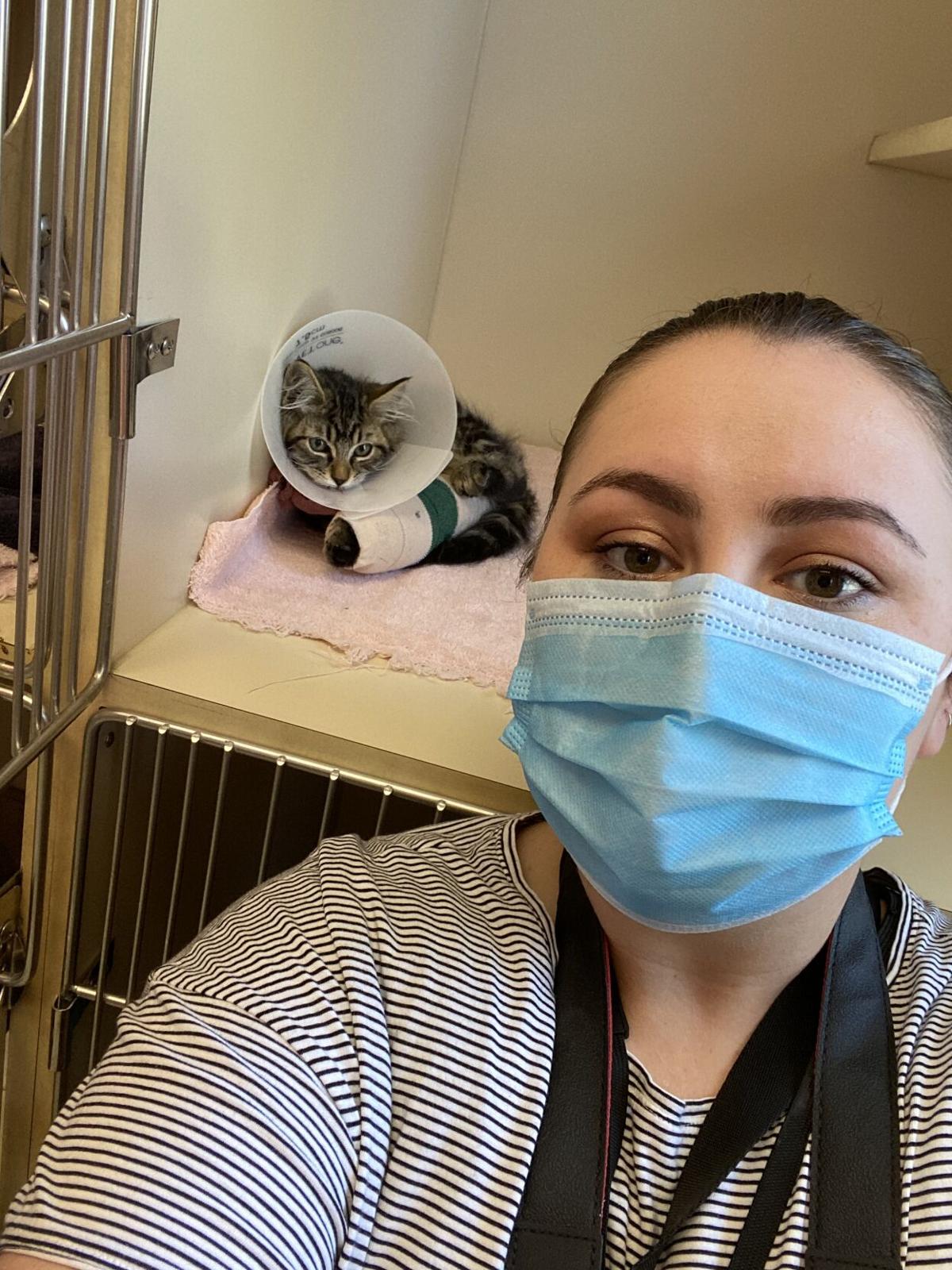 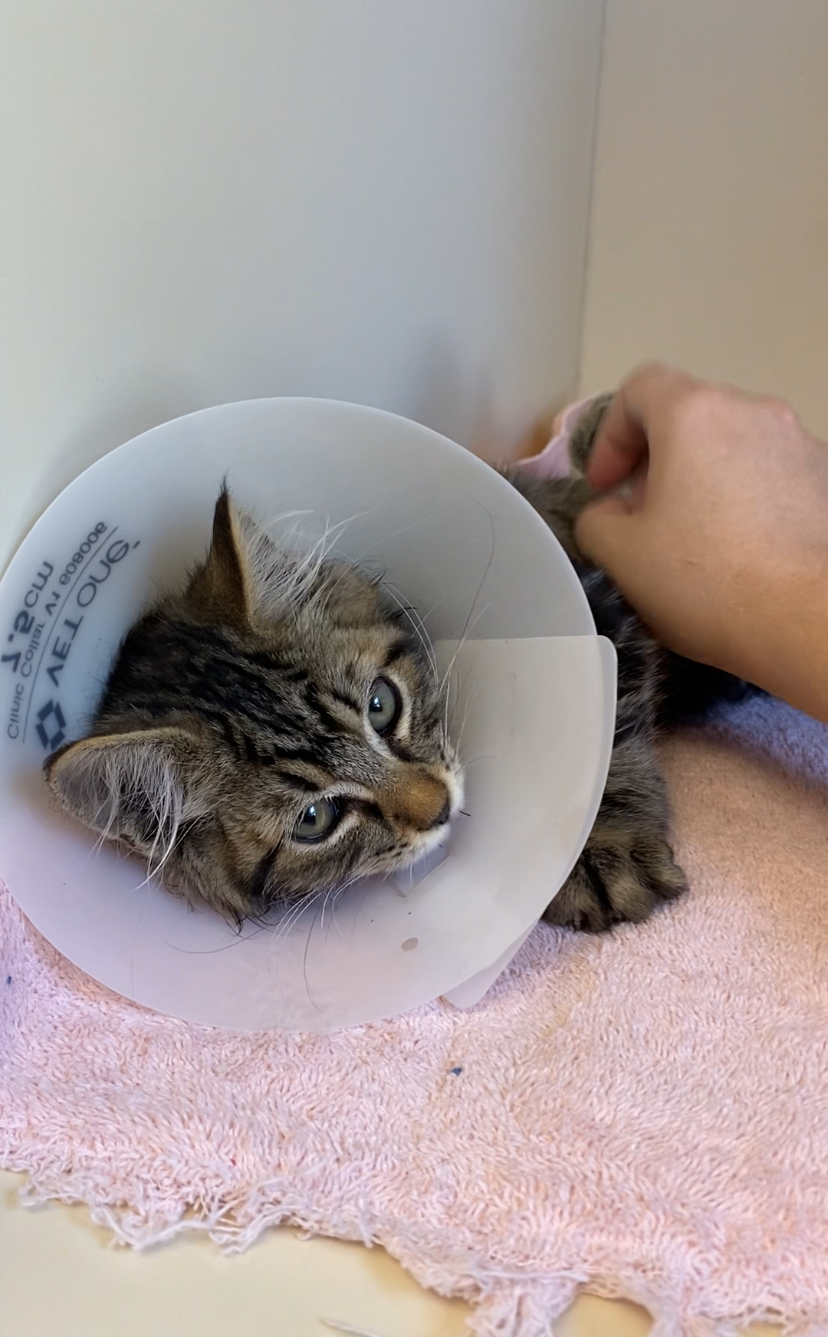 Crash purrs as he accepts belly rubs from Pettingill. He was even attempting to knead with his paws. 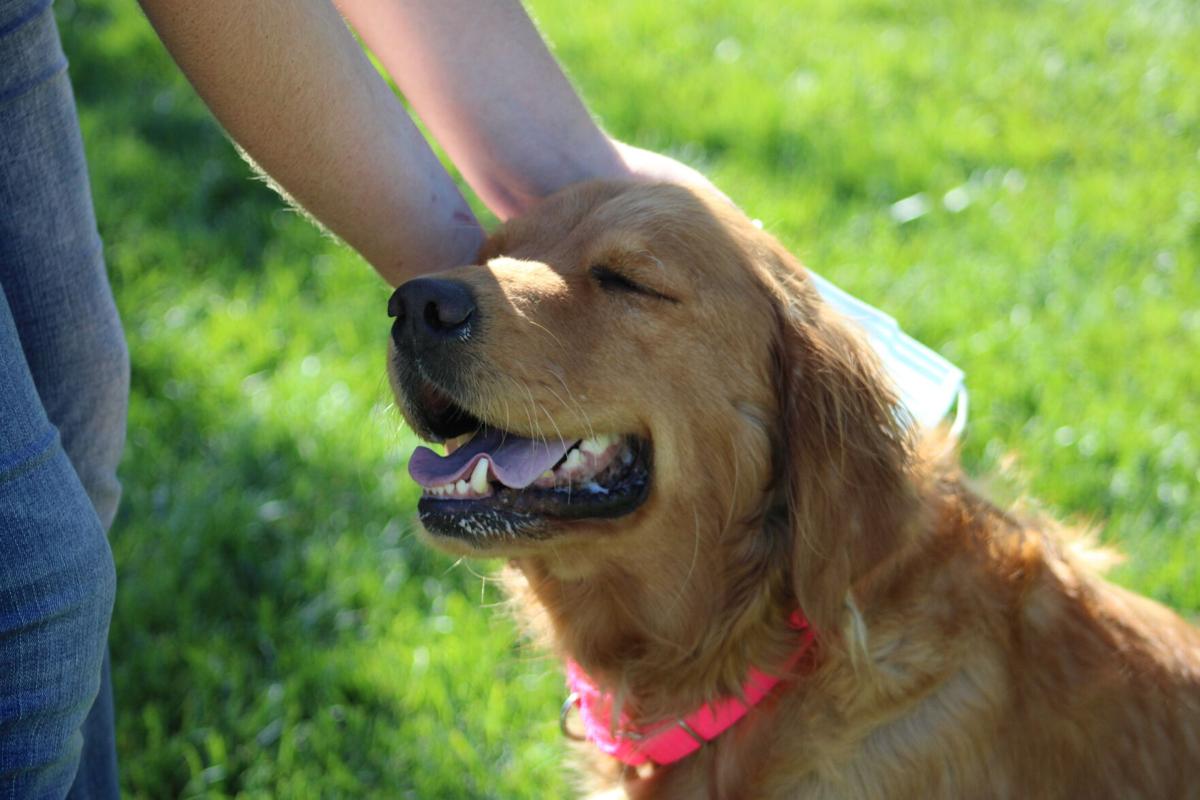 Molly the dog loves the pets she gets from shelter visitors.

Crash sits with his leg in a splint and a cone around his head so he can heal from his injuries at the shelter.

Crash purrs as he accepts belly rubs from Pettingill. He was even attempting to knead with his paws.

Molly the dog loves the pets she gets from shelter visitors.

Wednesday, Sept. 22 was a totally normal day, or it was until about 3:30 in the afternoon. I, along with my coworkers, were milling around getting things done to prepare for this week’s paper (the one you’re reading).

Quincy Police Officer Alan Talbot came into our office asking if we had made a call about a cat. We replied that none of us had and he explained that he had gotten a call about an injured kitten that ran under a red car in our area.

This immediately caught my attention for two reasons; the first being I am a huge cat lover. I always have been. Fun fact: I once had 16 cats. (Don’t worry, they were all mousers and we lived on a 10-acre farm). The second reason, I owned a red car that happened to be parked right out front of our building.

I pointed to Talbot that my car was red and straight in front of us so I grabbed my keys and we walked out to my car to check. Right underneath it was the kitten, obviously scared. I am so glad we went to check because I never would have known the little guy (we didn’t find out until later it was a boy) was under my car.

At first he tried to climb up into my car. We popped the hood and tried to grab him but he just climbed back down. Eventually Talbot grabbed what looked like the pinchers you would use to pick up trash and used that to try to grab the kitten and pull him out from under the car. That didn’t seem to be working but the kitten also seemed to be calming down. When we had first tried to catch him, he hissed and would move away but did not try to swat at us at all.

At this point in time, he had seemed to give up putting up a fight because he wasn’t hissing or trying to get away, he just laid there. I told Talbot instead of trying to pull the kitten towards him with the pinchers, to use it to push the cat towards me on the other side of my car. That worked and I was able to grab the kitten.

It was once I had the kitten in my arms that I realized he was injured. He had blood coming from his mouth and one leg was definitely broken. I thought he might have gotten run over and I assumed he had internal injuries due to the blood. He just sat in my arms, defeated while I carried him to Talbot’s patrol truck.

Talbot opened the trunk and I noticed there was nothing to put the kitten in so I went back into the Post-Register’s office with the kitten in my arms in search of a box. I figured it would be better for everyone involved so the cat wasn’t loose in the back or getting slid around during the drive. Once in the box, and in the truck, Talbot took the kitten to the shelter before they took him to the vet.

Luckily he seemed to have no internal injuries, just a broken leg and his jaw had been degloved.

The vet put a splint on his leg and stitches on his mouth. Now it’s just a waiting game to see how the leg heals.

They are going to check it in two weeks to see how it’s doing. If it is not healing properly, then the leg will probably need to be amputated.

Regardless, it seems that he will be just fine. It appears these injuries came from being run over but the shelter isn’t sure.

Talbot said he doesn’t pick up very many injured animals and he was very glad that the vet was able to work with him.

The shelter named the kitten “Crash”. It will be at least a month before Crash is ready for adoption.

A few feet away from Crash stood Molly, a yellow Labrador which the staff at the shelter suspects came from a puppy mill. They found her wandering the streets. She’s only three years old at most and she’s already had three litters, which led the shelter’s staff to think it probably hailed from a mill.

The poor pup was also showing some obvious signs that her care had not been the best, with a serious ear infection that had gone untreated for too long, and matted spots of fur. The doctor that treated her will serve as her foster pet dad until she’s ready to be adopted full-time.

Although the puppy-mill theory had not been confirmed, another reason to suspect the yellow Lab’s origins is the fact that the dog had not been trained to do anything. She did not even know how to fetch.

Once she got to the shelter, she learned pretty quick she liked rolling in the grass, though, and jumping on people.

Which brings us back to Crash, who hasn’t done much other than look sullen at the world since its accident.

He is not very happy about the splint or cone he has to wear but he seems to be loving the pets and attention he is receiving at the shelter, purring for average and distance, rolling on to its side so I could scratch its tummy, while still trying to look upset.