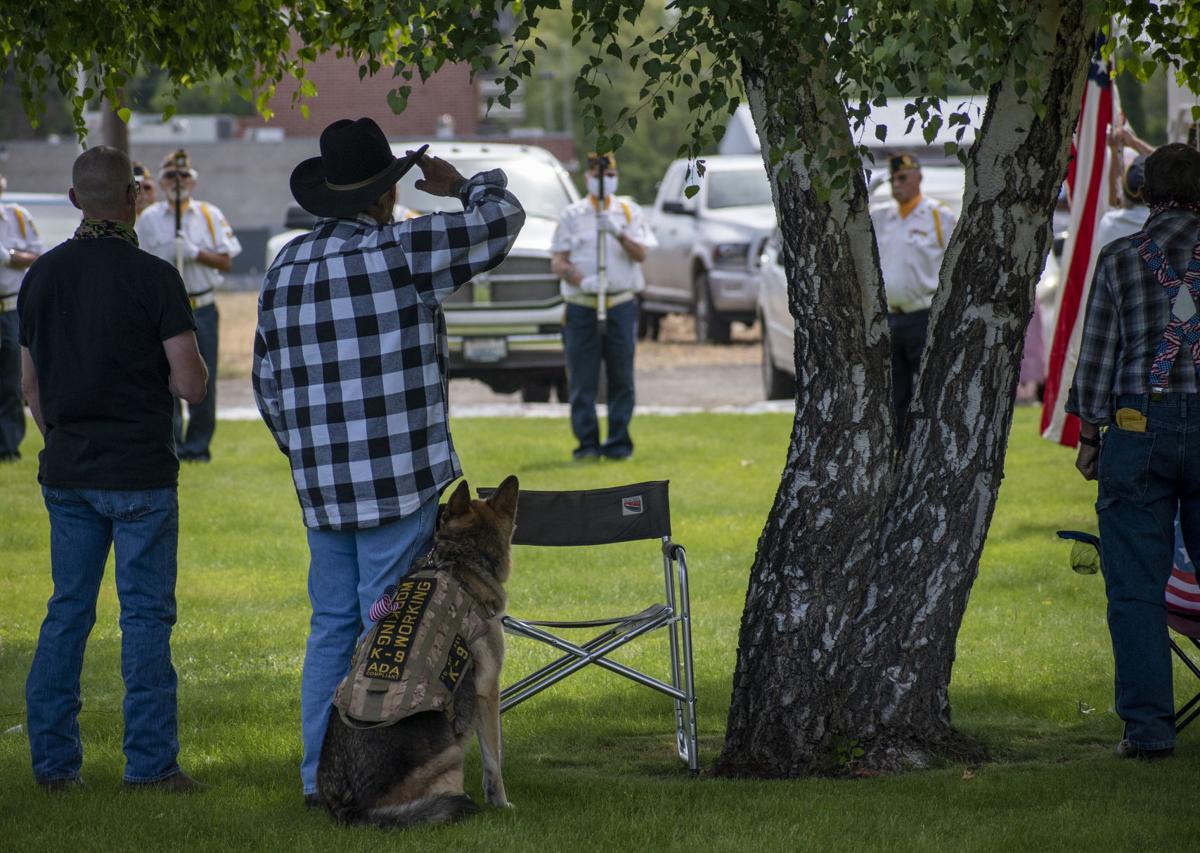 An attendee salutes during the flag ceremony at the beginning of George's annual 4th of July celebration. 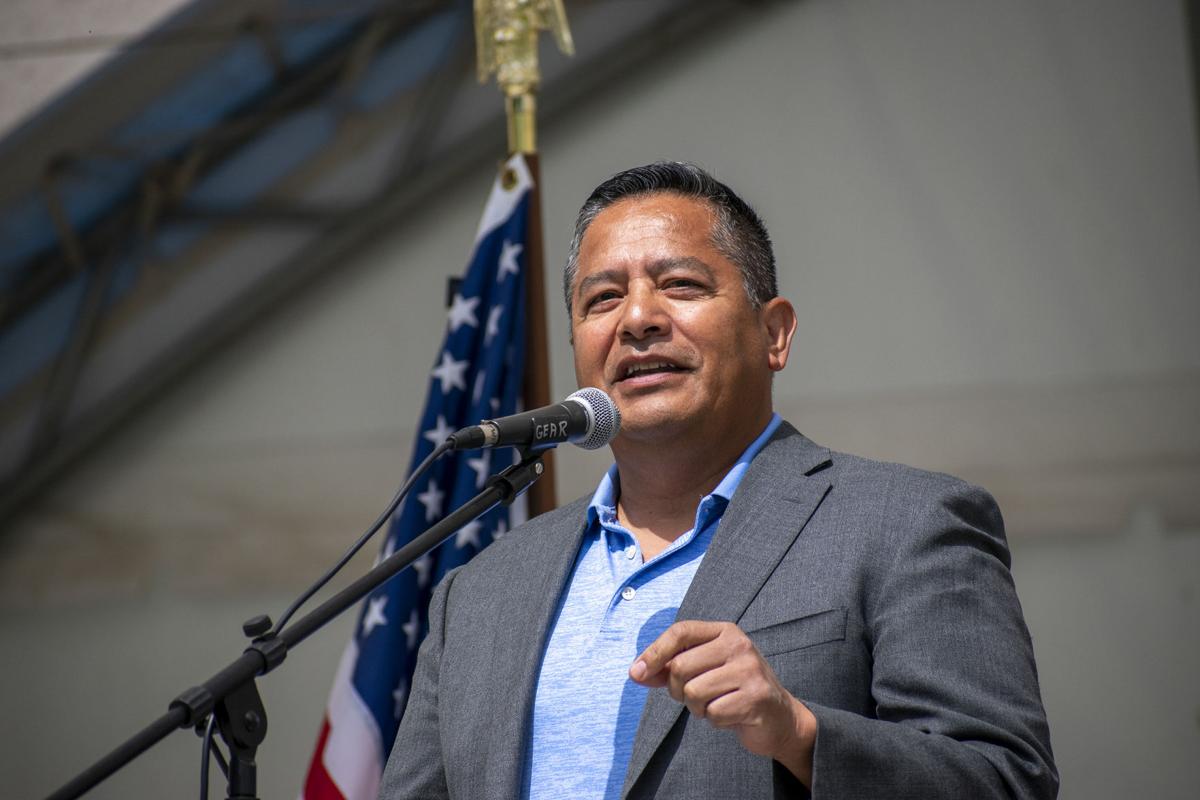 State Representative Alex Ybarra speaks at the celebration about the love he has for the George community. 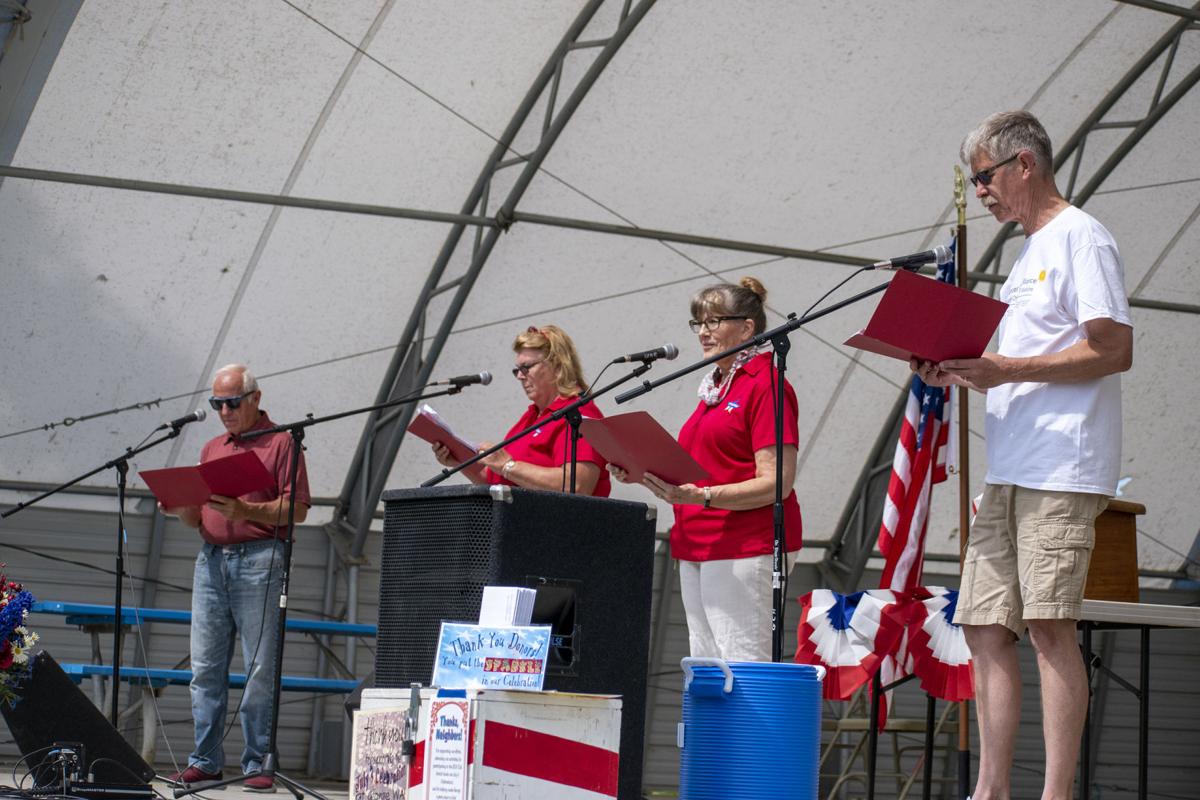 Members of GCH Ensemble read on stage a piece called “What Liberty Means.”

An attendee salutes during the flag ceremony at the beginning of George's annual 4th of July celebration.

State Representative Alex Ybarra speaks at the celebration about the love he has for the George community.

Members of GCH Ensemble read on stage a piece called “What Liberty Means.”

George’s annual Fourth of July celebration looked a little different than normal this year, but the turnout was about the same.

About 200 people attended the Fourth of July celebration that included a flag ceremony, speakers, singing and even a Fat Burger food truck.

A flag ceremony was held to start the event and included a twenty-one gun salute by the American Legion and VFW.

She concluded her speech saying she was looking forward to next year’s Fourth of July celebration that would include a parade and cherry pie like in years past.

“There’s no better place to be than George, Washington on the Fourth of July,” she added.

State Representative Alex Ybarra spoke next. He talked about how much the city of George meant to him and told the story of the UW band bus that crashed in November of 2018. He told of the community members of not only George, but of the whole Quincy Valley, that worked on Thanksgiving to make sure that the students had a warm place to stay, a warm meal and were able to reunite with separated classmates.

“This is why this community is so special to me,” Ybarra said.

State Representative Tom Dent took a turn after Ybarra. He spoke about congress unanimously adopting the Declaration of Independence in 1776. “What a beginning of the greatest country this world has ever seen,” Dent said. He then told the story of an old friend and Army Air Corps veteran, Cal Butler, who was a fighter pilot in WWII. He was shot down 11 days after D-Day, on his way out of France. He hit the tail of the plane while parachuting out and broke his back. He ended up being a POW in a German camp for seven months and received no medical treatment, which resulted in lifelong pain due to the neglected injury. Butler died in 2004 at the age of 85. Dent then changed topics to the election coming up this fall for Washington State Governor. He mentioned that there were 36 candidates, adding, “I think there’s 35 of them [that] could be better than what we have.”

He also spoke about his experience recently with being a state representative during the coronavirus pandemic. Dent addressed that he believes that a governor shouldn’t have that much power and has put together legislation with others to take some of that power away. He laughingly told Loren Culp, Chief of Police in Republic, Wash. and 2020 Governor Candidate, that if he became Governor he wouldn’t have that much power.

“Not that we don’t love ya, but you know, we just don’t trust ya, that’s all,” Dent said. He concluded that having choices to vote for whomever to put in office is what makes America what it is, and that he wants people to vote for who they believe in. “The time has come because we have a governor who is childish, he throws temper tantrums, and he doesn’t understand his role as governor and it’s time to replace him and the time is now,” he said.

Dent then introduced Culp, who started his speech by wishing folks a happy Independence Day. Culp then spoke about his candidacy and history as a Washington native, army veteran and a police officer. He also spoke about how he gained national attention for being one of the few law enforcement officers to publicly state that they would not enforce I-1639, claiming it was unconstitutional. He subsequently wrote a book titled “American Cop: Upholding the Constitution and Defending Your Right to Bear Arms.” Culp said what led him to run for governor was not wanting to live with regret if he knew he could do something to “turn this state around.”

Pastor Jess Slusher of Quincy Community Church closed the event with a prayer.

Quincy schools to remain online-only in the fall

Fireworks cause nearly 200 injuries so far this year