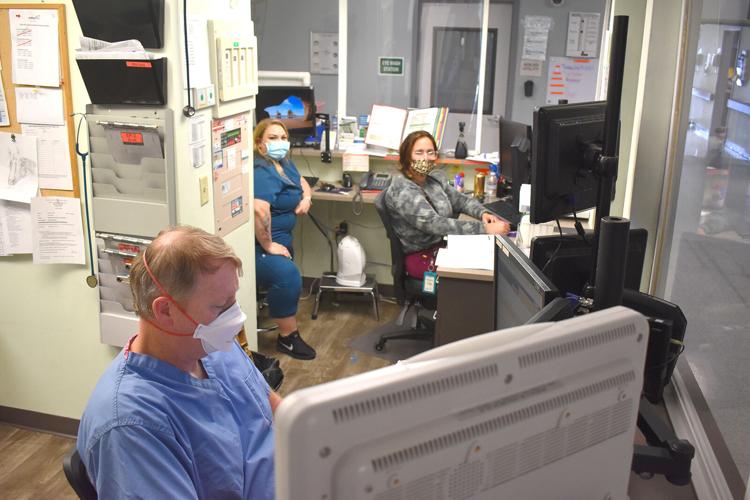 The nurses station inside the hospital has no room to spare. At left is Dr. Jonathan Crosier; Ocean Craig, a ward clerk/CNA, is at the center back; and at the computer is Andraya Silva, RN, charge nurse. 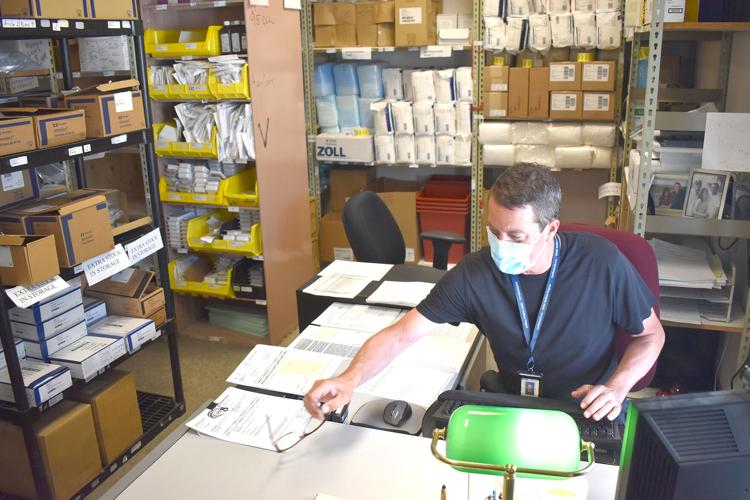 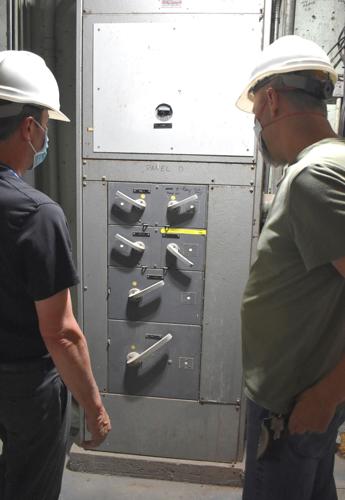 Quincy Valley Medical Center General Services Director Newton Moats, at left, and Shane Urwin, maintenance technician, stand in the maintenance shop and view an electrical panel dating back to 1959. It can turn power off or on for the main air-conditioning system and radiology room. 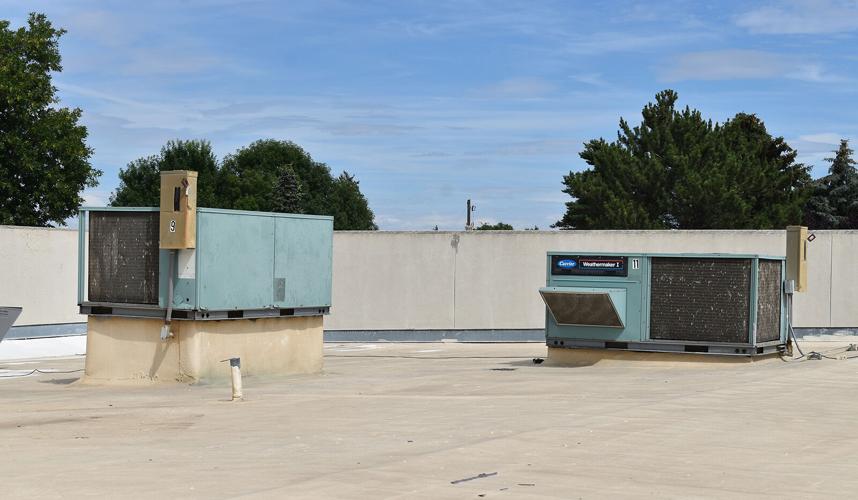 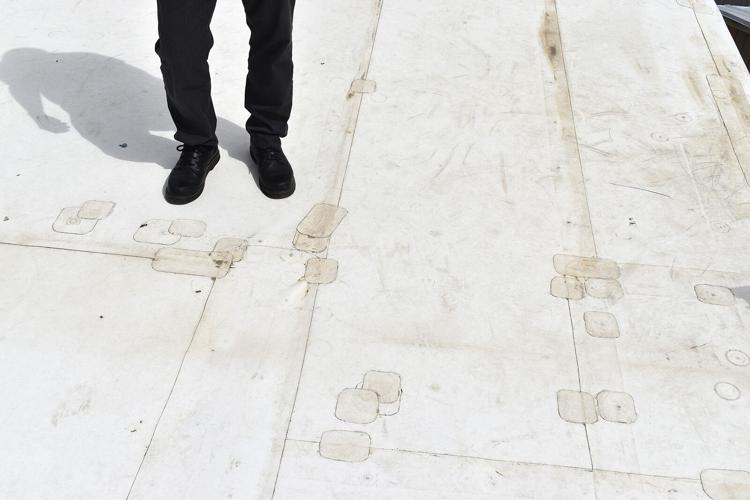 Quincy Valley Medical Center General Services Director Newton Moats shows some of the many patches on the roof. 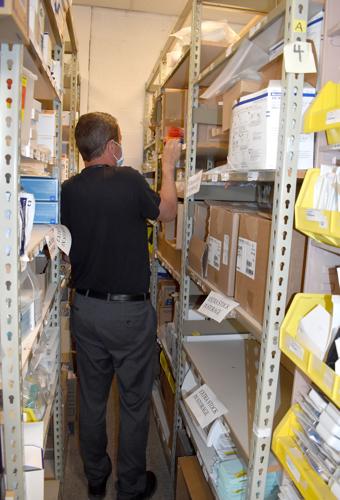 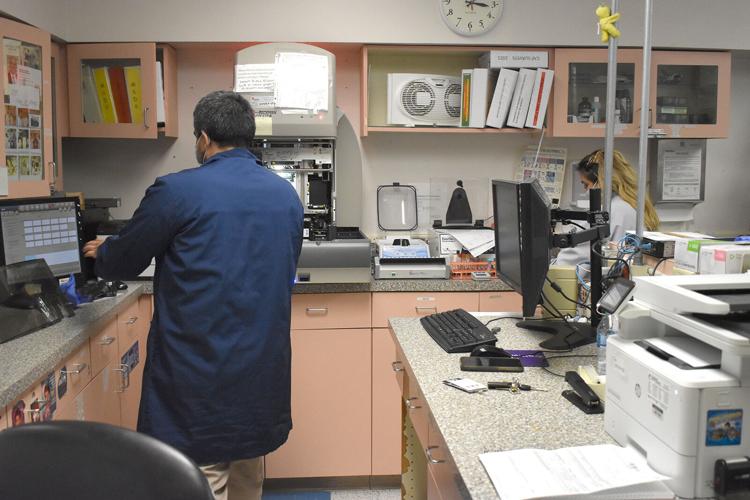 QVMC’s facilities are growing small and cramped, with many pieces of equipment as old as the 62-year-old hospital. lab is cramped with four people working in the small room. Two of them seen last week are, at left, Agustin Santos, and Duvelza Lopez, the lab manager. 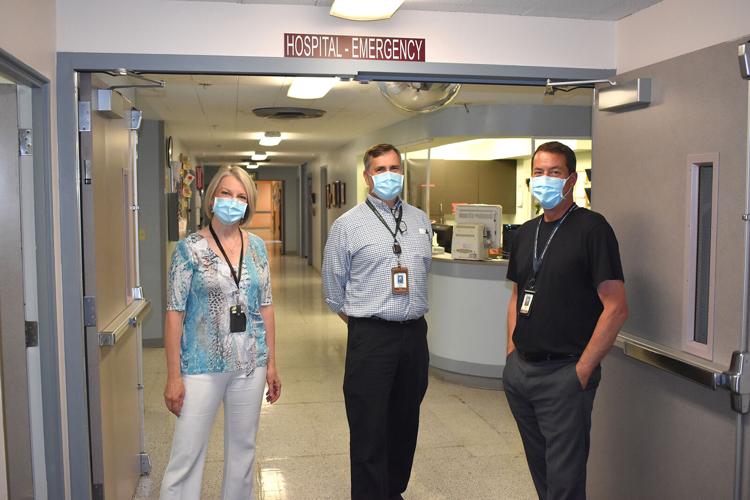 The nurses station inside the hospital has no room to spare. At left is Dr. Jonathan Crosier; Ocean Craig, a ward clerk/CNA, is at the center back; and at the computer is Andraya Silva, RN, charge nurse.

Quincy Valley Medical Center General Services Director Newton Moats, at left, and Shane Urwin, maintenance technician, stand in the maintenance shop and view an electrical panel dating back to 1959. It can turn power off or on for the main air-conditioning system and radiology room.

Quincy Valley Medical Center General Services Director Newton Moats shows some of the many patches on the roof.

QVMC’s facilities are growing small and cramped, with many pieces of equipment as old as the 62-year-old hospital. lab is cramped with four people working in the small room. Two of them seen last week are, at left, Agustin Santos, and Duvelza Lopez, the lab manager.

The Legacy Project created by the leaders of Quincy Valley Medical Center and the Port of Quincy is alive and well.

And now, five years into the Legacy Project’s shared vision has led to a pivotal measure on the Aug. 2 ballot – Proposition 1. The measure would support construction of a new hospital building through a tax levy, which would fund issuance of two series of bonds.

In many ways, the hospital is more ready than ever to replace its 1959 building and additions. To find out what brought the public hospital district to this point, the Post-Register on June 29 sat with two shapers of the Legacy Project: Glenda Bishop, the CEO and administrator of the medical center, which serves a large area of western Grant County, and Brian Kuest, a commissioner of the Port of Quincy, which serves a similar large area.

Bishop and Kuest say now is the time to build a new facility.

The hospital has the site and owns the land, and its building is only getting older and more expensive to repair and repurpose. For instance, the kitchen is the same original little kitchen from 1959. Recently, the fire suppression system over a stove had to be replaced and rewired at a cost of $13,000.

“I remind myself that there is a lot out there about how expensive health care is,” Bishop said.

But cost is not the only consideration.

“We are not just talking about the service that you get … we are talking about what it costs to deliver the health care. So, we wanted from the very beginning to keep the focus on quality health care and to remember that the infrastructure through which quality is delivered – there is a cost to it,” Bishop said.

For her, sustainable means not just for today, but long into the future. The champions of Quincy’s existing hospital have had such a view ahead to the needs of a growing community and future generations. Bishop referred to dedicated supporters of the hospital such as Mark Call, Jack Tobin and Lucy Jacques, who built up the hospital not just for their families but for people who would move to Quincy in the future.

“Quincy is growing because it has leadership that is giving thought to the future,” Bishop said.

For a Quincy community group formed to discuss QVMC back then, pairing up with a partner, another hospital system, was important, and it became part of the Legacy Project.

“We started the journey in February 2017,” Kuest said, “and in that process we interviewed, met with four or five different hospitals to find a suitable partner that would meet that quality, affordable, sustainable health care … at the end of the day we came up with the Legacy Project. What evolved out of that was the hospital’s management agreement with Samaritan to not only partner but to help our hospital provide additional services for the community.”

Bishop said Samaritan Healthcare of Moses Lake kept rising to the top during the search for a partner. It was a good fit with QVMC, she said, because both are run by public hospital districts. It was “on that strength that we said we will build this relationship,” she said.

The two districts get tax money separately, but together they bring services to Quincy. A good example of that cooperation, she said, is the pharmacy services agreement struck in January this year.

About the same time as when it formed that partnership, QVMC joined another group that brings benefits to Quincy – the Grand Columbia Health Alliance, a regional group of medical centers sharing resources.

Another thing the Legacy Project recognized was that it was going to be difficult for QVMC to move forward with its accumulated warrant debt, Bishop said.

“It took a multi-faceted strategy to address that,” she said, and it worked. The hospital district paid off the last of its warrant debt in 2021.

“The whole thing has been a process and a journey,” Kuest said.

He recalled how in early conversations, he and Bishop were at lunch and he drew on a napkin a creative way to get a new hospital built, an initial idea of the port building and owning the facility and the hospital leasing it.

Also early on, the port got a grant for a feasibility study of the existing hospital done by an architectural and engineering firm. The conversation then was like, “OK, we have a hospital built in 1959,” he said. “Is there anything here left that can be remodeled, or ... do we start fresh, do we start thinking about a new hospital?”

Bishop was glad to have such experts assessing facilities.

“This was comprehensive, complicated work done by experts in the field,” she said. “They came back with a really comprehensive report that was delivered to the port. And really it revealed what we know … we know that we have a facility that, in many areas, is grandfathered into code. We have expenses for repairs and ongoing maintenance for this building.”

The staff does what it has to do every day to make the facilities work, but the ongoing expenses needed to maintain a 62-year-old building are large, especially in the field of health care, which has seen so much technological change.

“We have demonstrated, I believe, tremendous accountability in how we have taken care of the building so we can meet the demands of a growing community,” Bishop said.

The next step was the architects and engineers met with every department manager to talk about space and their work.

“I think it is so important for the community to understand the diligence that has been applied to this,” she said.

“The report said you have an obsolete building and you can’t keep putting band-aids on it,” Kuest said.

With numerous systems at the end of their life, any remodeling or repair can become a major project to bring all the parts and systems up to current codes. Modern expectations have also changed, as in the design of patient rooms. For instance, something like a shared toilet between two patient rooms would not be in a modern facility, and building a replacement for QVMC would eliminate those shared facilities.

The assessment also included assurance the hospital’s property north of the current facility is large enough to build on. The hospital district bought that land about 12 years ago.

“How significant that decision and that purchase became to the overall success of the Legacy Project, we didn’t even know,” Bishop said.

She looks back with admiration for the board members who decided to purchase the property when it became available. It means QVMC can stay at its site and thereby keep its federal designation as a critical access hospital. It can also remain operational through any building project, she said.

“All of those things are so critical to the community,” Bishop said.

It also means a construction project would not have to wait for site selection and an acquisition process.

When COVID-19 hit, it interrupted but did not end the Legacy Project. It’s vision for QVMC is still so solid, Kuest went on to say, “If this levy were to fail, that is still intact.”

The pandemic kept QVMC busy, but Bishop did not call it time lost. Then about six months ago, community group meetings resumed, this time, with a project manager with tremendous expertise and an investment banker who has knowledge of Grant County, she said.

“We brought the best and most relevant minds to the table,” she said. “Out of that, what we clearly heard was, ‘It’s time.’”

Such projects are helped by economic development in the Quincy area. Kuest said the assessed value of property in the district gives the Quincy area favorable property tax rates, and other taxing districts have benefitted from them.

He said he has been a proponent all along of the possibilities of “other ways to bring capital to the table to help facilitate the construction of a new hospital without putting all of the burden on the taxpayer. … (But) however you look at it, you would still have needed a tax levy in some fashion to support a new hospital facility.”

Nevertheless, the plan – to issue bonds in two series, the first get construction going, and the second later – would provide time for those other, added funding possibilities.

“There is still an opportunity bring some additional capital to the table that will reduce, hopefully, the second bond issuance,” Kuest said.

Taxpayers would be levied for only the amount of the bonds, he said. Proposition 1 is to authorize an amount not to exceed $55 million, and that amount may turn out to be lower if other funds are raised through grants or philanthropy, for instance.

Meanwhile, the Port of Quincy and Quincy Valley Medical Center remain committed to the vision of affordable, quality, sustainable health care. And alongside that vision, a two-word phrase that has become a strongly held belief, almost a mantra: It’s time.