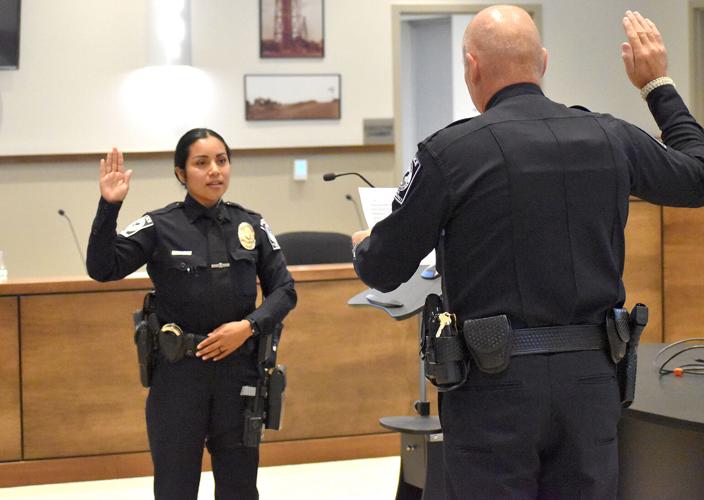 Chief of Police Kieth Siebert gives the oath of office for Officer Jessica Diaz on July 5 at Quincy City Hall. 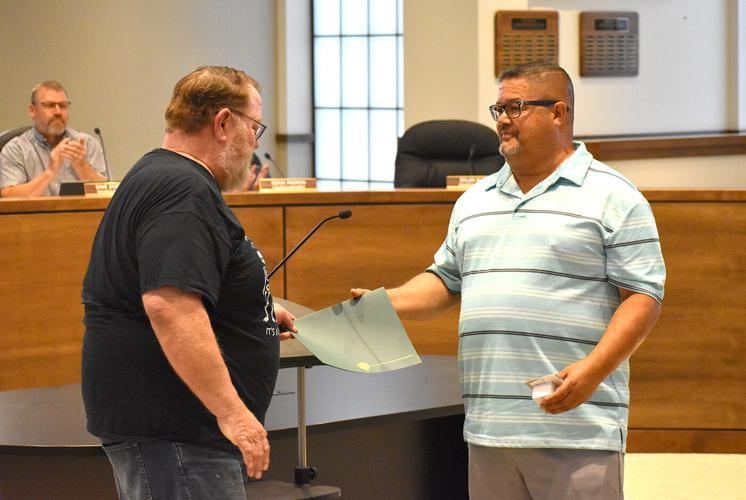 Mayor Paul Worley, at left, presents a service award to Public Works employee Roy Echavarria for his 35 years working for the city of Quincy on July 5 at city hall.

Chief of Police Kieth Siebert gives the oath of office for Officer Jessica Diaz on July 5 at Quincy City Hall.

Mayor Paul Worley, at left, presents a service award to Public Works employee Roy Echavarria for his 35 years working for the city of Quincy on July 5 at city hall.

Quincy Chief of Police Kieth Siebert gave the oath of office to Officer Jessica Diaz at the July 5 meeting of the Quincy City Council after she completed training at the state’s police academy.

Later in the meeting, Siebert said Diaz did extra work and training on her own at the academy and was elected vice president of her class.

“We are lucky to have her,” Siebert said.

Diaz next goes into 12 weeks of field training in Quincy.

Another city employee was in the spotlight July 5, as Roy Echavarria was honored with a service award for reaching 35 years of working for the city. Mayor Paul Worley presented the award to Echavarria, who works in the Public Works Department.

Diaz and Echavarria were given warm rounds of applause.

During the public comment portion of the meeting, a citizen stood and asked city officials about what could be done about parking in front of his home on B Street NE once the city’s current project on the street is complete.

The city is rebuilding the street and adding a walking path, lighting, landscaping, a stormwater system and curbs and gutters at a cost of about $3.2 million. Six blocks of the street are closed to through traffic during construction.

Municipal Services Director Carl Worley said there is going to be a stormwater collection swale, a sort of shallower ditch, in the area of the resident’s house, rather than curbside parking, but the design for the new B Street NE includes parking in other areas along the six blocks of the project.

The city had an issue with utility bills in June. Nancy Schanze, the city clerk and financial clerk, told the council about a “perfect storm” causing a delay in mailing out the bills. Council member Tom Harris moved to waive utility bill penalties in July, and the council voted to approve the motion, so residents won’t be charged for late payments for June utilities.

In his report, Mayor Worley thanked responsible users of fireworks, those who followed the hours limitations and cleaned up the streets afterward.

In other city business:

- A public hearing was held for the city’s six-year Transportation Improvement Program. No one spoke during the hearing.

- The council passed a resolution to raise a fee on a 20-yard garbage container, following a rate increase from Consolidated Disposal Services Inc.

- The council passed a resolution adopting a use agreement for the Aquatic Center, establishing a template for the public to rent the city’s pools. Recreation Director Russ Harrington said the proposed agreement makes it similar to the city’s other facility use agreements.

- The council passed a resolution setting the time and day for a public hearing on the city’s proposed Downtown Revitalization Plan. The hearing will be at 7 p.m. July 19 in the council chamber.