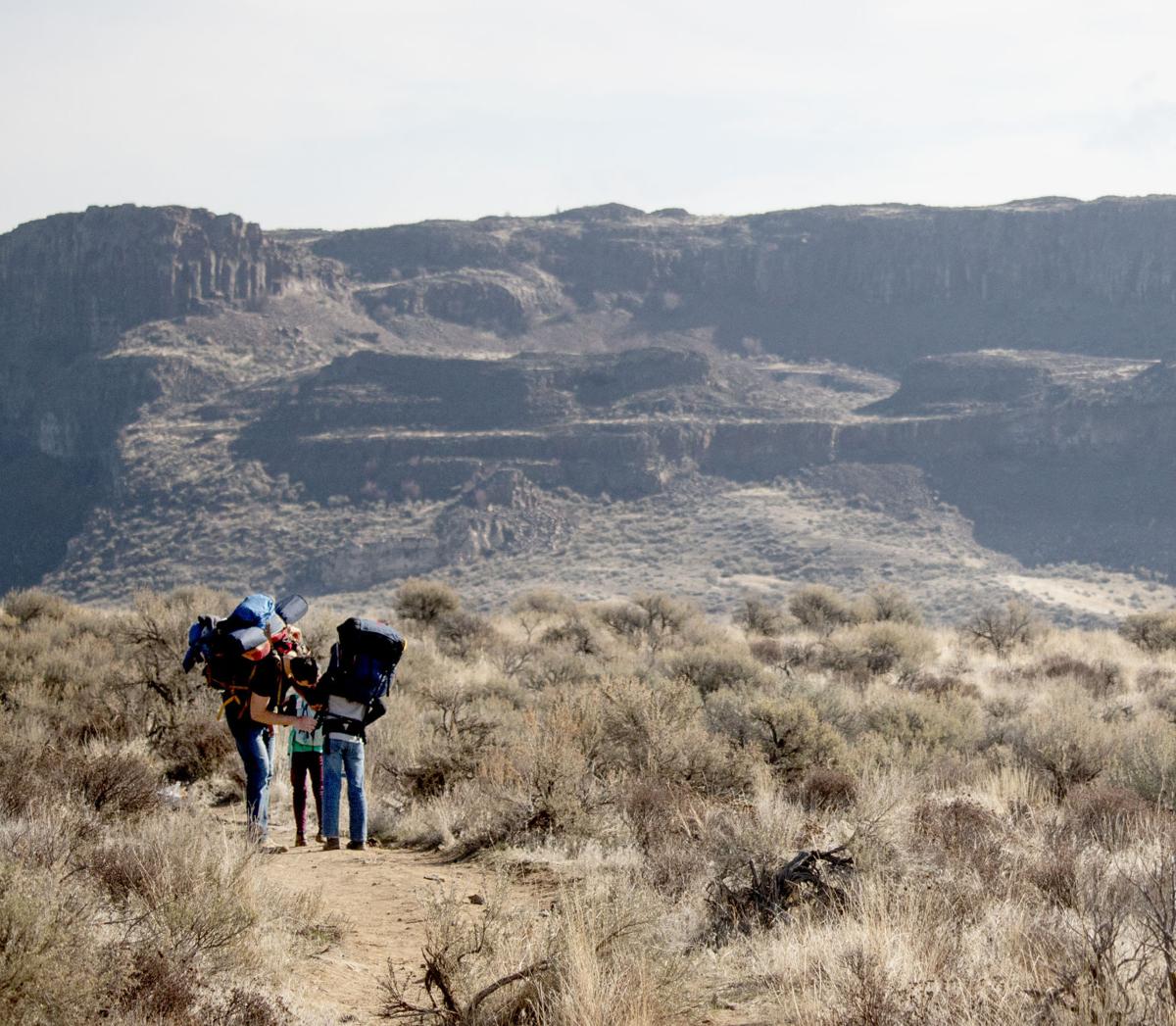 A dad checks the straps on his children’s backpacks at Ancient Lakes on Feb. 22. The property is owned by the state Department of Fish and Wildlife, but the Bishop property is adjacent to this land. 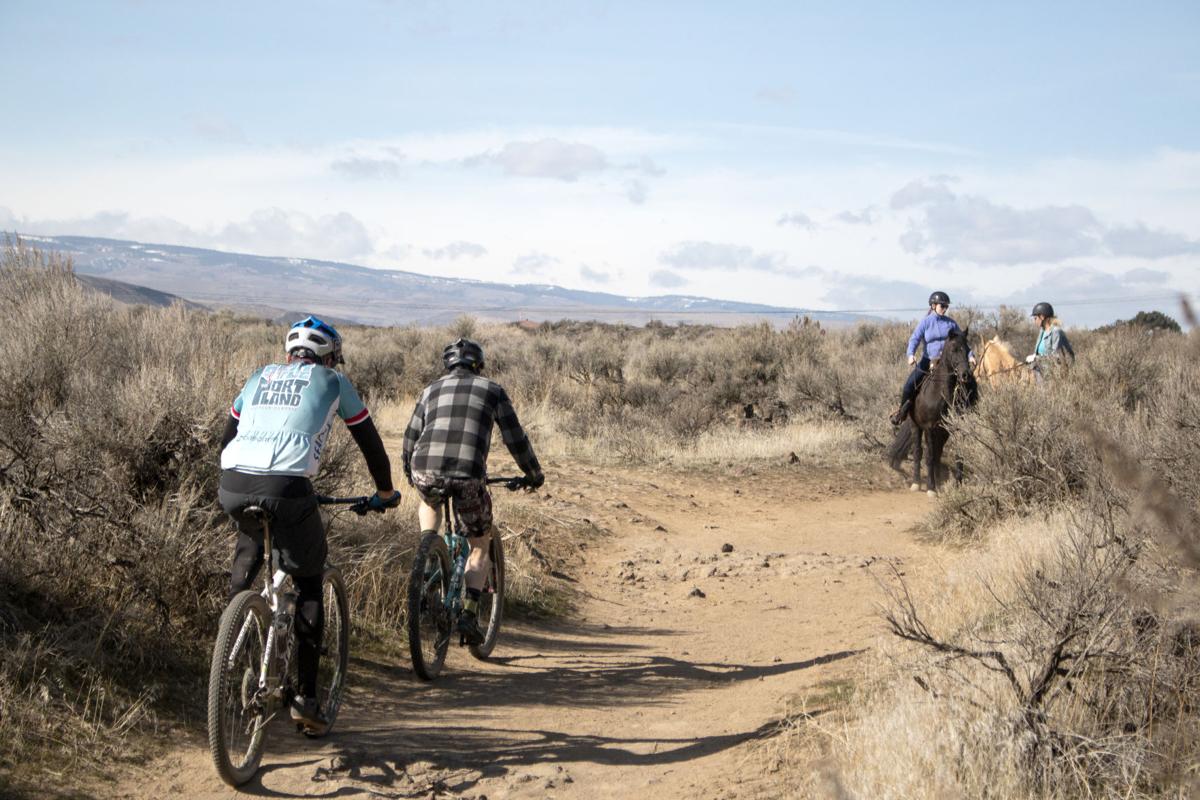 A group of bicyclists pass horseback riders on Feb. 22 at Ancient Lakes. The port plans to preserve the Bishop for these type of uses. 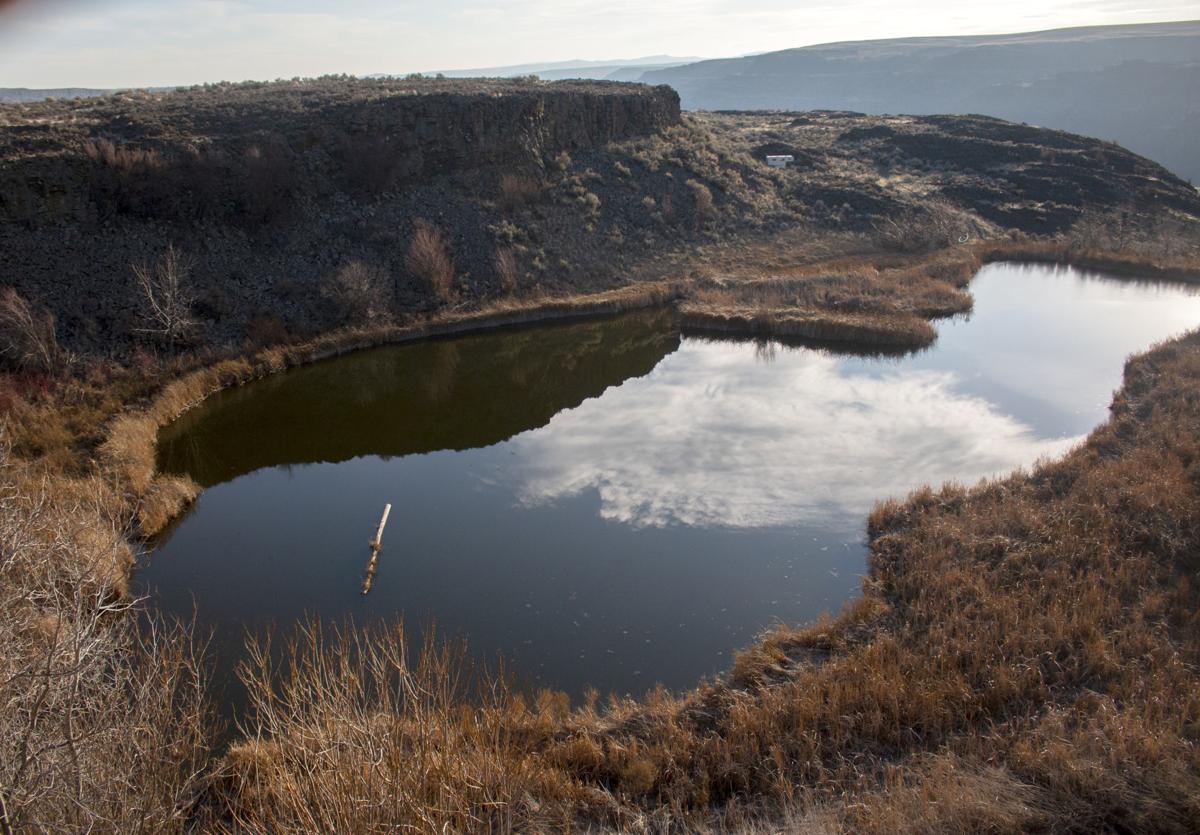 A pond on the Bishop land that was sold to the Port of Quincy.

A dad checks the straps on his children’s backpacks at Ancient Lakes on Feb. 22. The property is owned by the state Department of Fish and Wildlife, but the Bishop property is adjacent to this land.

A group of bicyclists pass horseback riders on Feb. 22 at Ancient Lakes. The port plans to preserve the Bishop for these type of uses.

A pond on the Bishop land that was sold to the Port of Quincy.

The sun beats down on sage bush covered cliffs as meadowlarks flitter between the bushes.

This idyllic landscape at the end of Ancient Lake Road, 10 miles southeast of Quincy, will be preserved by the Port of Quincy for the public, Port Commissioner Curt Morris said. The port purchased nearly 90 acres of the land from Dave Bishop on Jan. 31.

“It is not really worth anything for anything else,” Dave Bishop said. “The water is interruptible, so you can’t guarantee it, so farming is kind of iffy.”

The port plans to tear down the Bishop’s old house and put an interpretive center there, Morris said. They are also talking about hiking and horseback riding trails, a corral, camping spots and maybe an RV area.

“It is an amazing spot,” Morris said. “We’ve had different thoughts of having stargazing because you have no light down there in the summer. But we want to make it so it is getting used.”

It is all theoretical right now and the port doesn’t want to have it too developed, he said. They plan to create a business plan before any decisions are made.

The port was leasing the land from Bishop for about five years before it purchased it, Morris said. As part of the lease agreement, some of the money they paid went toward the purchase price, which was close to $1 million.

This year the port needed to make a decision whether to purchase the property or walk away from it, he said. The port had about $600,000 toward the purchase price at that point, so it made sense to buy it.

Bishop said his family has been in the area for several decades. His brother moved down to the area officially in the late 50s, but before that they would catch wild horses there and sell them to be turned into pet food.

“There was nothing down here,” Bishop said. “They farmed this little valley, there was wheat in those days, but that was before there was water.”

Bishop didn’t officially move to the Ancient Lakes area until the 80s after returning from 22 years of working in the military, he said. He then raised cattle and grew alfalfa.

The area has a lot of unique qualities that make it special, Bishop said. For one thing, several prehistoric fossils have been found, including giant ground sloths and camels.

“Out in this field here one time when I was plowing it, up came some bones and they were camel bones,” he said. “There are two registered archaeological sites not on the property, but just off of it. Bones come out of there 15,000 years old.”

It is also an area where Native Americans used to live and it holds geological evidence of the Missoula Floods; the cataclysmic floods from Lake Missoula that swept across Eastern Washington carving out the Columbia River Gorge at the end of the last ice age.

Bishop’s house is still next to the property that he is selling, he said. He kept about 20 acres for himself, but it is mostly rock. At 83 years old, he’s done farming and ready to move on with his life.

“When you die, it is all gone,” he said. “I got no feelings about that. No, I'm happy to let someone else deal with it. It is a unique area and let the port open it up to the people, that’s my feelings if that’s what you mean.”

COVID-19 positives jump from eight to 25 in five days

A community rallies amidst a virus