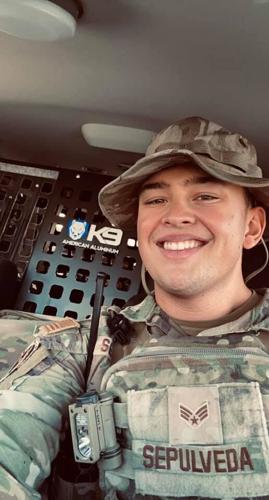 Chase Sepulveda smiles in his uniform while in a Security Forces vehicle. 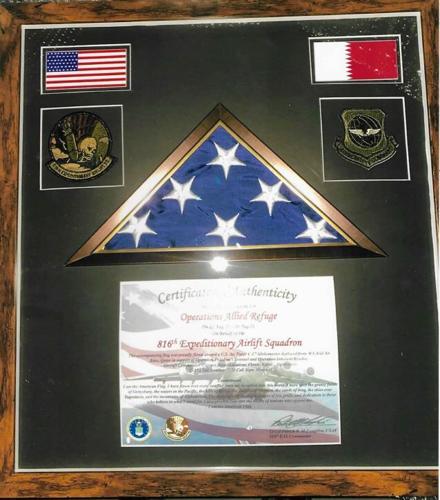 The flag and certificate that was presented to Chase Sepulveda on Sept. 10.

Chase Sepulveda smiles in his uniform while in a Security Forces vehicle.

The flag and certificate that was presented to Chase Sepulveda on Sept. 10.

One Quincy graduate is one of many soldiers who was deployed to the Middle East to deal with the conflict in Afghanistan over the last few months.

In fact, most recently he was at the Kabul Airport during the evacuations that filled American TV screens in August.

Senior Airman (SrA) Chase Sepulveda graduated from Quincy High School in 2017. After graduating, he took a year off, and in December of 2018 he enlisted in the U.S. Air Force with a six-year contract, starting basic training in March 2019.

Sepulveda followed in his father’s footsteps. Charles Sepulveda served in the Air Force for five years in Europe; a majority of that time in the Netherlands. He deployed from Soesterberg Air Base with an F-15 bomber squadron to help handle the north front of Desert Storm, an operation part of the First Gulf War.

Charles’ 22-year-old son has been deployed in the Middle East since mid-April. He is serving with the 633rd Security Forces Squad out of Langley, Va. and is stationed at the Al Udeid Air Base in Qatar.

Chase was one of 19 security force members chosen for a mission to go to the Kabul Airport. His aircraft was one of the first to arrive at the airport. He helped evacuate refugees and deliver food. While there, they were also responsible for acting as security for the airport and their aircraft.

On Aug. 30, President Joe Biden said: “The past 17 days have seen our troops execute the largest airlift in U.S. history, evacuating over 120,000 U.S. citizens, citizens of our allies, and Afghan allies of the United States.”

During that time Chase was pulling 30 hour shifts with only eight hour breaks in between, Charles said.

On Sept. 10, Chase was one of only a handful chosen to receive one of the flags that hung in the aircraft he flew on during the mission. The aircraft was a C-17 Globemaster in support of Operation Freedom’s Sentinel and Operation Inherent Resolve, according to the certificate presented to Sepulveda.

Charles said he was disheartened to learn about the string of vandalism surrounding American flags in Quincy when soldiers like his son are out risking their lives for that same flag.

“I think really the television that people saw at home did not really capture the entire picture of what was really going on and it was a lot of work,” Chase said in a phone interview. “A lot of long nights, a lot of long days and I think people should be really proud of not necessarily what I did, but of what the United States did overall.”

On Monday, Chase said that it was his first night back in Qatar in a month not being on fly away status. Chase is expected to return stateside in the next month or so, because he and his wife are expecting their first child in November.

The flag given to Chase Sepulveda contains a message that encapsulates the meaning of the flag, what it represents and what it endures. It reads:  “I am the American Flag, I have flown over every conflict since my inception into this world.

I have seen the grassy fields of Gettysburg, the waters in the Pacific, the hills of Korea, the jungles of Vietnam, the sands of Iraq, the skies over Yugoslavia, and the mountains of Afghanistan.

The mere sight of me invokes tears of joy, pride, and dedication to those who believe in what I stand for.

I also provoke fear into the hearts of nations who oppose me.

I am the American Flag.”

Port of Quincy gets property inquiries from companies