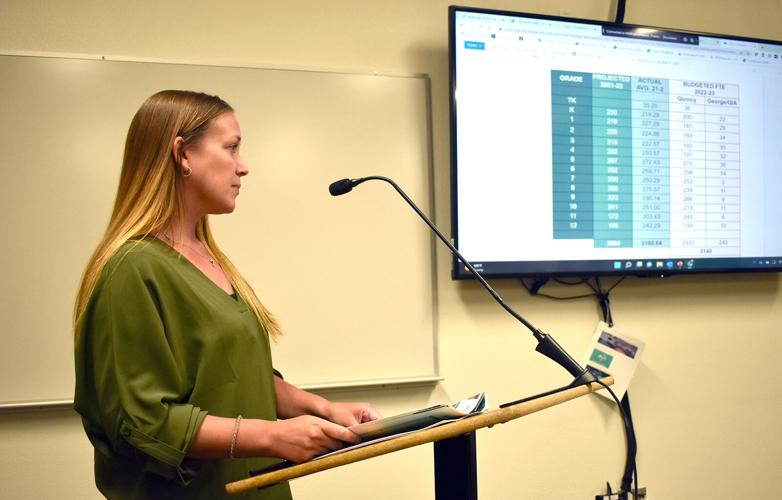 Tia Stoddard, Quincy School District’s finance director, gives the board of directors an overview of the budget for the upcoming school year July 26. 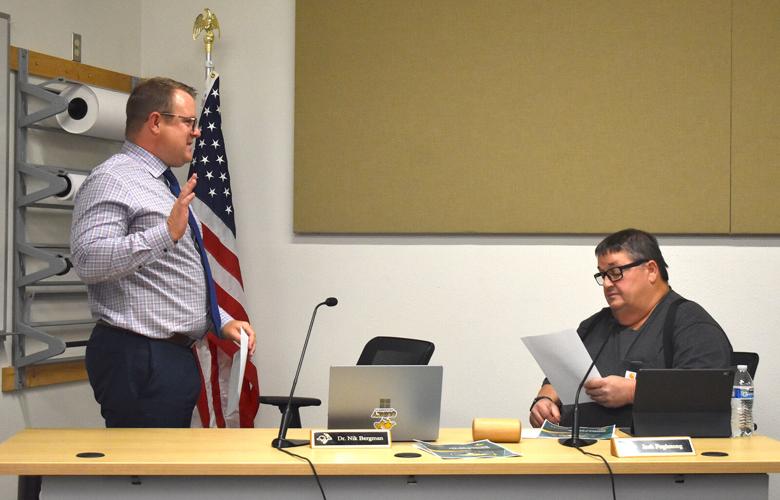 Tia Stoddard, Quincy School District’s finance director, gives the board of directors an overview of the budget for the upcoming school year July 26.

With the 2022-2023 school year fast approaching, the Quincy School Board took a look at the budget for the upcoming school year, and it got an introduction to an idea for collecting some of the district administration staff in the building formerly occupied by Quincy Innovation Academy.

The July 26 meeting of the board had directors Chad Lower and Chris Baumgartner participating by remote, while Tricia Lubach was absent.

“I’m not budgeting to spend all that we have in there,” she said, referring to the capital budget, “because we are saving for future projects, and it’s also nice to have a cushion so that if you have a chiller go out .. we are able to do that.”

Here are some of the budget’s highlights.

- The bus purchase plan includes a $500,000 expense, which will cover the purchase of about three buses, Stoddard said.

- The usual percentage of total expenditures devoted to salaries and benefits used to be about 81%, she said. This time it is 72%.

- The enrollment projection is for 3,140, which is about 80 more students in the district than last year.

At the conclusion of her overview, the board had no comments or questions for Stoddard.

“She does a phenomenal job … very lucky to have you as the business manager, and I just really appreciate you. So thank you for your work on this,” Bergman said.

The board voted to approve the budget with none opposed.

Following the vote, board member Jack Foglesong gave the oath of office for Bergman.

Then Tom Harris, district facilities director, gave an update on planning, including a discussion of the conceptual Center for Student Success. The CSS idea was one of three projects prioritized by the facilities committee for the near term. Two of the three are completed, but the CSS – a new building concept to gather administration staff in one building – is not.

“The construction cost has gone up,” Harris said. The estimated cost now is $7.4 million, whereas a previously stated estimate was $6.8 million.

He listed the possible funding source options, including property sales possibilities and told the board the facilities committee said it is not the right time to ask voters for a capital tax measure, leaving the funding for the CSS project a question mark.

The current main district office has 15 employees crowded in spaces that have been split up into small offices and cubicles.

“We have really worked hard to make room for the people in the office, but it is not an ideal situation,” Harris said. “We do need some kind of a gap measure in there for these folks to maybe be moved into a different location better suited for the work they have to do.”

As such an intermediate step, he talked about remodeling the former location of Quincy Innovation Academy, formerly called High Tech High, in downtown Quincy. For a cost of about $450,000, the interior could be redone with offices and hold 25-32 people – not all the administration staff.

The board members had no questions or comments for Harris.

Afterward, Foglesong said the budget presentation was routine, with no surprises. Commenting on the idea of moving some district personnel into the former QIA building, he said the move would free up other QSD property to be sold as surplus.