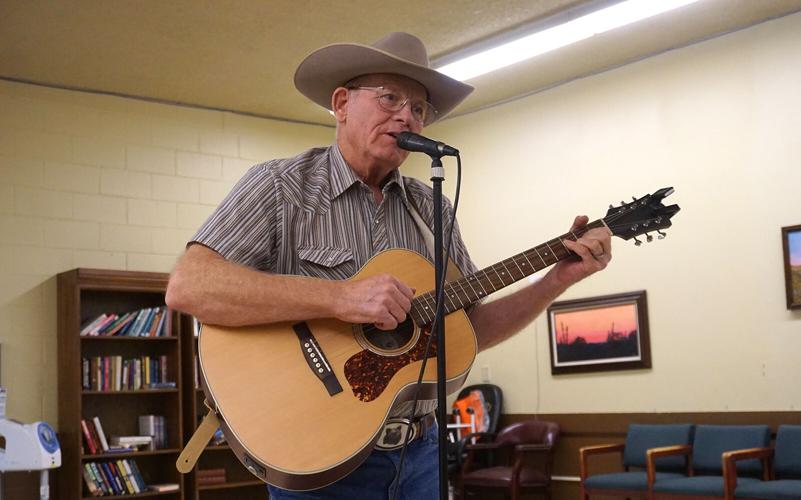 Poets Glen Bair, seen here, and John Kulm entertained and amused a crowd at the Quincy Senior Center on Nov. 10, part of a growing list of events coming to the center in these frigid late-fall, early-winter days. 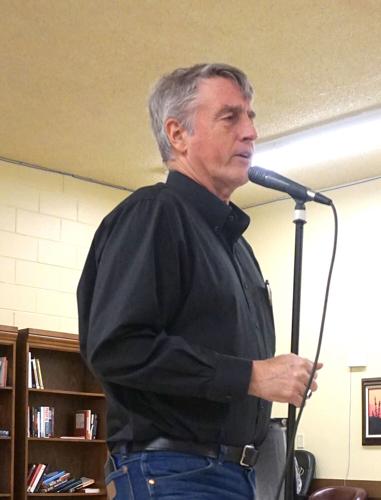 Poets Glen Bair and John Kulm, seen here, entertained and amused a crowd at the Quincy Senior Center on Nov. 10, part of a growing list of events coming to the center in these frigid late-fall, early-winter days.

Poets Glen Bair, seen here, and John Kulm entertained and amused a crowd at the Quincy Senior Center on Nov. 10, part of a growing list of events coming to the center in these frigid late-fall, early-winter days.

Poets Glen Bair and John Kulm, seen here, entertained and amused a crowd at the Quincy Senior Center on Nov. 10, part of a growing list of events coming to the center in these frigid late-fall, early-winter days.

There seems to be a lot of untapped talent in Quincy. On Nov. 10, John Kulm and Glen Bair shared their poetry at the Quincy Senior Center. This event was open to senior members of the community. Donations were accepted at the door to help support senior center programs, followed by a dinner after the event.

Bonnie Kniveton, a member of the Quincy Senior Center, previously saw Kulm perform at a poetry event at the Pioneer Church in Quincy. “I thought something could be done at the Senior Center,” Kniveton said.

Kniveton contacted Kulm, who agreed to perform, and then she contacted Bair to put together the one-hour event. Quincy Senior Center Director Stacia Soukup explained that they were brainstorming, looking for different things that would be entertaining for the community and for the senior center members.

Kulm, the son of a farmer who worked his land out on Block 74, admitted he wasn’t really made for farming, but that is what he did growing up. Bair spent his life in Ephrata and moved to Quincy two years ago with his wife to be close to family.

The two men originally met at the National Cowboy Poetry Gathering in Elko, Nevada, in the early nineties, and realized that they were both from the same area of Washington. After the gathering, they agreed to put on a performance at the Lee Theater in Ephrata.

Bair started writing around 1990 as he recalled. His wife hinted that she wanted a poem. “I could hear the music in my head,” Kulm said. A friend, Jess Goodwin, introduced him to the poetry angle. He was invited to a poetry gathering in Pendleton, Oregon, and he was hooked.

“One guy told me he could read poetry for three hours,” Bair said. “I said holy cow!” and now I can do that, too!”

Bair entertained the crowd with his poem about a grizzly bear, based “loosely” on a story from 1913. He recited the poem from memory. The poem was an entire epic story about a bear who could not and would not be caught. Bair followed up his poem with the song “Roses In Winter” by Merle Haggard, and then sang his own song a-capella. He also included the audience in a sing-along to “Big-Nosed George.”

John Kulm followed Bair with his poetry. “The way Glen and I are different is that I don’t memorize any of it,” Kulm said.

Kulm’s poetry was filled with light humor based on some of his life experiences. He wrote a poem about an ex-girlfriend. Kulm announced, “It’s available on Kindle. It’s on sale for 99 cents. So far it’s made 99 cents.”

Kulm read a poem about repairing a combine, and the pitfalls of trying to buy parts to fix it, all the while being “upsold” at the parts store. He also spent some of his career writing poems about the post office.

Poems by Kulm can be found on the Barnes and Noble website and on Kindle. Bair often performs his cowboy poetry around the region. Future events at the Quincy Senior Center include Christmas Dinner with the Rocky Ford Band on Dec. 15, followed by the Valentine’s dinner Feb. 9.

Keep an eye out for more activities to be added. For information or questions regarding their weekly activities and meals offered, call 78-3231. The Quincy Senior Center is located at 522 F St. SE.

Christmas community choir brings people together one note at a time