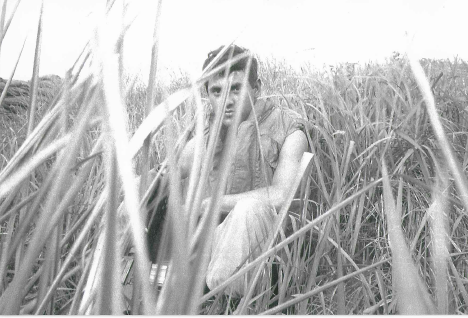 Vicente Sanchez Jr sits in the tall grass in Vietnam during his tour. 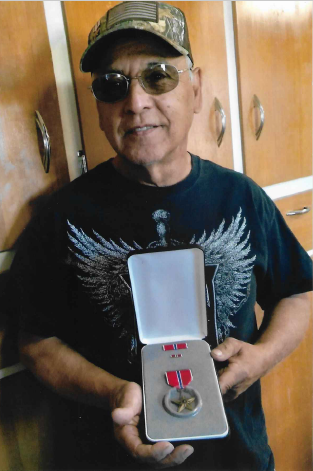 Sanchez with his Bronze Star Medal he received on April 17.

Vicente Sanchez Jr sits in the tall grass in Vietnam during his tour.

Sanchez with his Bronze Star Medal he received on April 17.

A Quincy High School alum and Vietnam veteran received the Bronze Star Medal on April 17, 2021; 50 years after the event that earned him the recognition.

In October of 1969, Vicente Sanchez Jr enlisted in the army. He completed basic training at Fort Lewis, now Joint Base Lewis-McChord, and went to Fort Gordon in Georgia for Army Initial Training for 18 weeks. His military occupations specialty was Avionics Mechanic, which included wire troubleshooting radios and navigational equipment on army aircrafts.

At the completion of his training he was able to spend a couple weeks home with his family before being shipped off to Vietnam on June 23, 1970.

While in Vietnam, he completed 29 missions and traveled from I corps to IV corps.

During his tour, Sanchez was ordered to Kontum Airfield, a base named after the city it was closely located to but nicknamed Rocket City due to the frequency it was mortared, rocketed and overrun.

Immediately upon arrival at the base, Sanchez headed to the radio tower to repair a headset.

“While working on the headset, all hell broke loose. The sirens went off and we were plagued with heavy mortars and rockets,” Sanchez recalled. He explained that he saw people heading for cover and the mortars and rockets hitting the airstrip but barely missing the Huey helicopters.

The radio tower controller ordered him to head to the bunkers but Sanchez ignored the order and continued to work on the headset while the mortars and rockets were still coming in heavy.

“For some reason I was not scared. I just did what I had to do, whatever it took,” Sanchez said.

He fixed the headset right as the other headset that the air traffic controller was using to warn incoming Hueys quit working. Once he gave the controller the fixed headset, he then finally complied with the original order to head to the bunkers.

After the bombing came to a halt, Sanchez returned to the radio tower to see if any more equipment needed to be fixed. It was at that point that the radio tower controller thanked him for his willingness to endure the attack to complete the work required. He was then informed that his work had saved the lives of two helicopters; the pilots, crew and all the troops aboard the two Hueys. The tower that he had been at had also barely missed being bombed by only a couple of feet.

He completed his Vietnam tour on May 23, 1971. When he returned, he was stationed at Ft. Lewis and attached to the 184th Military Intelligence Unit. Sanchez was honorably discharged from the Army on April 25, 1972.

Sanchez grew up in a migrant family. His father worked as a farm laborer on many different farms which meant the family moved a lot. Sanchez had seven siblings and started to work in the fields when he was only about 13 years old. One of the farms that Sanchez’s father worked for was Yoshino’s Farms which brought the family to Quincy when Sanchez was just starting high school.

Sanchez graduated from QHS in 1968 and went on to attend Yakima Valley Community College with the intention of becoming a math teacher. There he received his General Welding Certificate and partially finished his general education studies.

Before joining, two of Sanchez’s brothers-in-law, David Barrera and Ramiro Hinojosa, both from Quincy were both drafted and were sent to Vietnam. Not only did both come home alive but both were awarded the Bronze Star as Sanchez would later be.

13 years after leaving the army, in 1985, Sanchez “felt the need to return to serve my country,” as he put it, so he joined the Army National Guard in Ephrata. While in the National Guard, a retired Vietnam veteran named Walt Cordova became aware of Sanchez’s story and felt that despite being recognized for his actions, that Sanchez deserved a higher award. He encouraged Sanchez to appeal for a higher award, but Sanchez became overwhelmed and frustrated over the amount of paperwork required. Cordova passed away before Sanchez applied for the upgraded honor. It wasn’t until 2016 Sanchez completed the work required to pursue an upgraded award with the help of Colonel Mike Pierce because he wanted to honor Cordova’s wishes. Staff Sergeant Walter Kehn contacted Brigade General Oscar Hillman about the submission of the paperwork. After looking into it, Hillman felt that Sanchez deserved a higher honor than what he was pursuing and chose to put in support for a higher honor resulting in Sanchez being awarded the Bronze Star Medal.

On April 17, Sanchez received the Army Bronze Star Medal by retired Colonel Layman at the American Legion Post 28 in Ephrata.

Sanchez said he is very fortunate and blessed, not only to receive the honor but to have even made it home. He said that even though people may say he is a hero, he does not see himself as a hero; that the true heroes are the ones who did not make it back home.

“This will be a very memorable and special day for me. I want to thank my dear friends, my family and my American Legion family for all their support,” Sanchez said.

QHS drama hosts first in-person production in over a year

Talley promoted to Lieutenant at GCFD#3